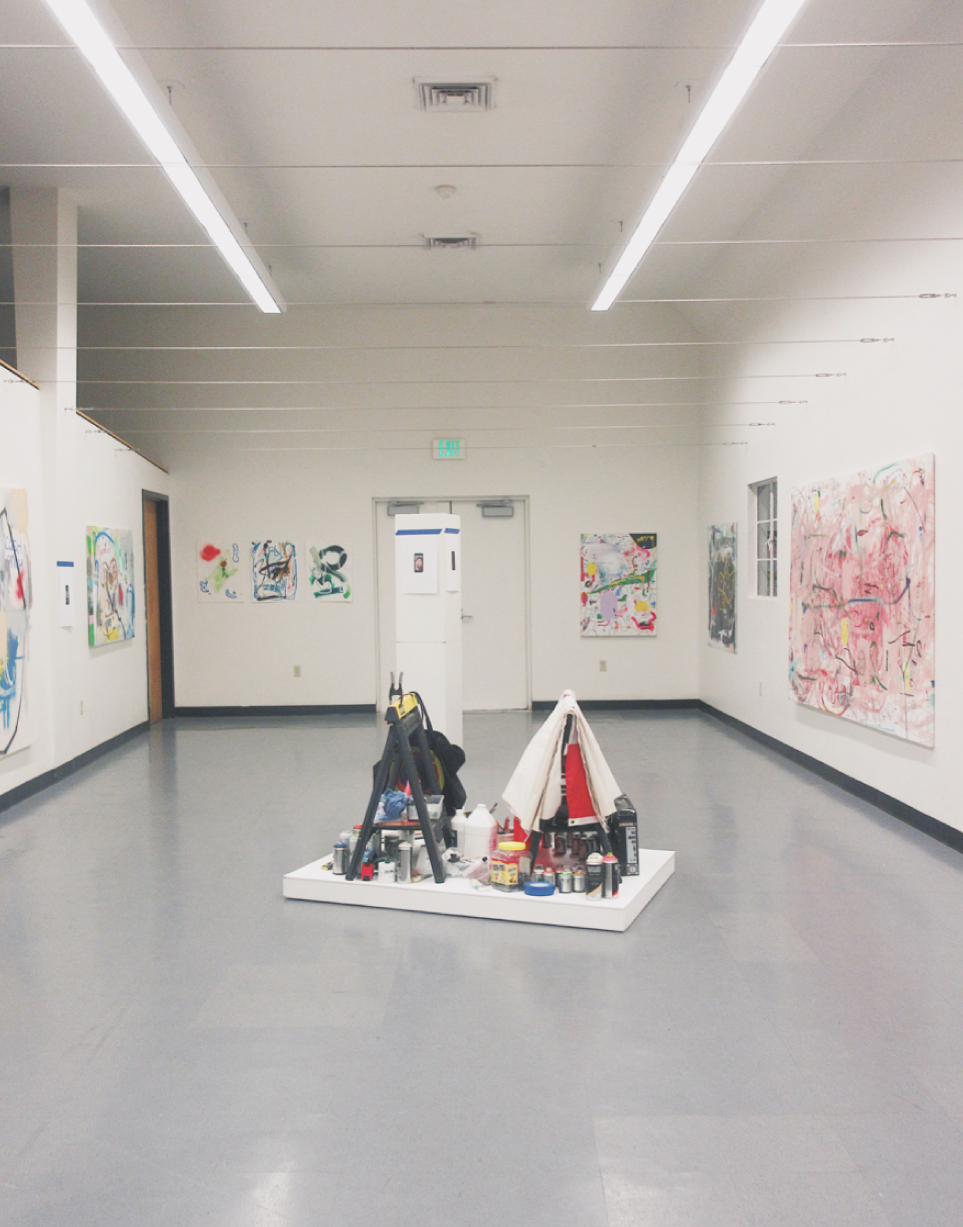 First thing I saw when I entered the Link in Bio opening, by Bryan Valdez located in the Canoga Park Youth Center I saw a pile of spray cans and hardware tools placed nicely on white platform in the center of the space. For a youth center, this opening looked like an actual gallery. Bryan’s work was surrounded across the whole space with minimal & maximal paintings next to iPhone screenshots about bitcoin.
So I was thinking we do an a little interview thing.

You got questions ready?

Not really I want to make it seem like I just met you last night.

But yeah last night was cool man. What made you choose a youth center for your show?

I got together with Carlos who curated the show a few months ago and he was the one that suggested the space about a year ago. He agreed to curate the show sometime in January. He’s Been a mentor to me the last couple of years.

That’s awesome you make it look like a real gallery. So you did this project over the couple months?

Yeah they have classes there during the day with kids, like full on drum, percussion sessions where some of the work is. The director liked my work we set a dat. Carlos came over to my studio and we began conceptualizing.

Carlos is a designer correct?

Yeah he has his studio and teaches a class at Otis.

Do both of you work together regularly?

We’ve had several creative exchanges and the idea of working together on a project for a while but this is the first time we executed something.

What made you think about screenshots & bitcoin? Lmao

I mean I was living that rollercoaster.

You made money or no?

I’m definitely in the green but no Lamborghini yet.

Buy low, sell high. It’s not as easy as it sounds.

How does that translate into your paintings?

So the screenshots was all Carlos, I haven’t really discussed it with him, it was more of him telling me what it might look like and then seeing the prints that day and I was just taken completely away by it. The paintings are just everyday battle that let me go to sleep at night without getting too sappy. I only add that at the end because it’s absolutely spiritual and emotional but the painting says more than I can make sense of.

You know what I feel you. One of the paintings had the letters html crossed out. You don’t like coding?

I have very little experience with java and C++ but now you can have an app translate everything into HTML thanks to Adobe. People make a living with this stuff.

The idea of it being the language of the internet in hindsight is something I can agree to as why it landed on that specific painting.

Yeah that’s why I took a web design class lmao. I had this idea for my final project and it was website that can find certain skate spots depending on your location. I got a D- smh. All because it was incomplete.

Fuck, That sounds like some heavy math before any web designing needed to be done. lol

That’s what I’m saying. I was way over my head I didn’t know a thing about that lmao I just wanted to skate.

Dreamers make reality worth waking up to.